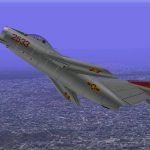 The MiG-17 was the primary interceptor of the fledgling Vietnam People’s Air Force in 1965, scoring its first aerial victories and seeing extensive combat during the Vietnam War, the aircraft frequently worked in conjunction with MiG-21s and MiG-19s. Many historians believe that some North Vietnamese pilots, in fact, preferred the MiG-17 over the MiG-21 because it was more agile, though not as fast; however, of the 16 NVAF Aces of the war, 13 of them attained that status while flying the MiG-21. Only 3 North Vietnamese Airmen gained Ace status while flying the MiG-17. I have included a damage profile for use with CFS1, with armament of 2x 23 mm, 1x 37 mm. cannons, rockets and bombs and repainted in three textures: -MiG17 Fresco Vietnam People’s Air Force # 2533, all silver. -MiG17 Fresco Vietnam People’s Air Force # 5020, tan/green spots camouflaged. -MiG17 Fresco Vietnam People’s Air Force # 1905, green/olive/tan camouflaged. To add drop tanks, turn on instrumental panel lights. To activate air-brakes, set full spoilers. FS98 Aircraft Designer: Chris Lampard. North Vietnam’s textures and DP: Edmundo Abad Dec. 2009

Are you looking for Combat Flight Simulator 1 Mods at one place? Then you have landed in the right place. We provide the access to our huge database of mods for all kind of needs. Every Combat Flight Simulator 1 Addons has its own type, specifications and features so it’s easy to find what you lack in your game. If you have already chosen the file, click on MiG17 – North Vietnam Air Force Mod download button and follow the instructions. It’s as easy and simple as possible! The MiG17 – North Vietnam Air Force mod will also allow your game number of things. There are still may other mods some of them are little tweaks like a camera changer while others introduce a whole new story mode into your game. Aside from that, we have mods introducing new content to the game, new levels developed by independent creators that will spark a ray of joy within your Flight Simulator. MiG17 – North Vietnam Air Force Mod could be a great boost to your game and there are no reasons why to react negatively. Take the best that you can and don’t look back – you must be orientated to the future and new experiences.