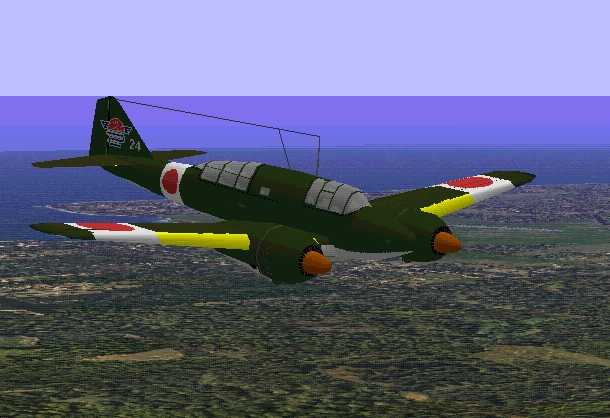 CFS Mitsubishi Ki46-III_KAI Upgrade. New version with animated propellers and landing gear. Original KI 46-II / FS95 aircraft, converted to CFS1 with new panel, gunstations and repainted textures. The Mitsubishi Ki46 Dinah, fighter version, called “Hyakushiki Shitei III-Kai (Dinah)” was a development of the Ki-46-III Reconnaisance Aircraft, with cameras deleted, though it reverted to a more conventional cockpit canopy arrangement, as the nose had to be fitted with twin Ho-5 20 mm. cannon with 200 rounds per gun. An Ho-203 37 mm. cannon with 200 rounds capacity was placed in a fixed mounting on the top of the aircraft to fire upward and forward at an angle of 60 degrees from the horizontal, similar to “Schrage Musik” weapons in German night fighters. Original Designer for FS95: Herve Devred/1996. Panel: I used the panel of BF110 made by Jody ‘Psiico’ O’Brien/1999 (included). Repainted textures, moving parts, damage profile and air file: Edmundo Abad/2010.