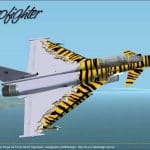 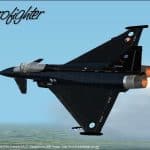 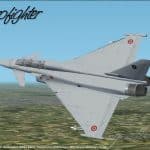 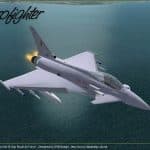 FS2004/2002 DSBdesign Eurofighter Typhoon. The Eurofighter Typhoon represents the cutting edge in modern military combat aircraft for the 21st Century. Developed in conjunction with Eurofighter GmbH, we at DSB Design bring you by far the most accurate visual model of the Eurofighter Typhoon for any version of Microsoft Flight Simulator. In addition, our team have worked long and hard to accurately model the Flight Dynamics of this fast and nimble fighter aircraft, so that you can experience some of the high speed thrills that the Eurofighter test pilots often comment about. Single Seat & Twin Seat visual models with numerous weapons loadouts. Liveries for BAE Systems DA2, DA4 and IPA1 aircraft. Fictional liveries for No 17 Sqn. and No 29 Sqn. Royal Air Force as well as a fictional ‘Tigermeet’ scheme. Additional liveries for Germany, Spain, Italy and Greece. Automated afterburner effect with fully dynamic exhaust section, wing-tip contrails and gear mounted landing light system based on XML gauge programming. Custom panel by Eric De Best of Cockpits.nl with gauges by Johan Peeters of the I3D Design Group and Eric Marciano. Unique sounds by Mike Hambly and Peter Saveraux. Ten premium quality texture sets by Paul Barry of DSB Design. Model by Dave Brice. See Readme for further credits. 16.2MB

Are you looking for Flight Simulator 2004 Mods at one place? Then you have landed in the right place. We provide the access to our huge database of mods for all kind of needs. Every Flight Simulator 2004 Addons has its own type, specifications and features so it’s easy to find what you lack in your game. If you have already chosen the file, click on FS2004/2002 DSBdesign Eurofighter Typhoon Mod download button and follow the instructions. It’s as easy and simple as possible! The FS2004/2002 DSBdesign Eurofighter Typhoon mod will also allow your game number of things. There are still may other mods some of them are little tweaks like a camera changer while others introduce a whole new story mode into your game. Aside from that, we have mods introducing new content to the game, new levels developed by independent creators that will spark a ray of joy within your Flight Simulator. FS2004/2002 DSBdesign Eurofighter Typhoon Mod could be a great boost to your game and there are no reasons why to react negatively. Take the best that you can and don’t look back – you must be orientated to the future and new experiences.