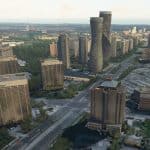 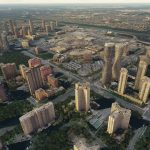 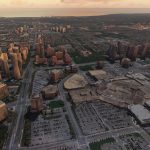 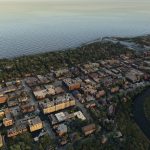 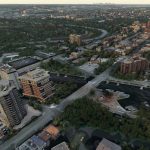 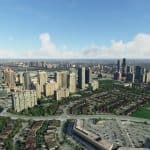 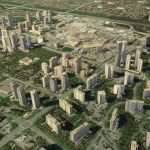 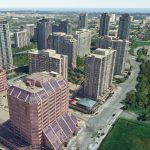 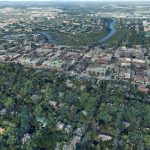 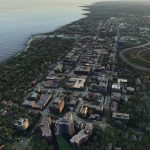 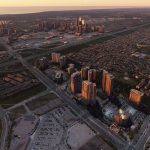 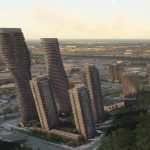 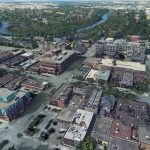 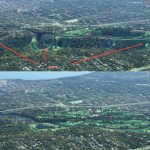 Introduction
The areas of the pack are very close to CYYZ – Toronto Pearson International Airport. Toronto has photogrammetry in MSFS, and Toronto Island CYTZ is a custom airport, but photogrammetry ends outside of Toronto proper, and starts again around Burlington and Hamilton area. Many important Greater Toronto Area VFR landmarks and POI are left to autogen.

I’ve decided to correct that as much as I can, as well as fix some glaring terrain errors, such as a huge and long weird “aqueduct” type ridge with a Humber river on top.

Mississauga downtown bildings and condos are very close to where the Pearson airport is and clearly visible on every arrival and departure. Some distinctive areas on Toronto lakeshore beyond photogrammetry area, Oakville Downtown, Oakville Trafalgar Hospital area with a helipad, and two major GA airports in the area: Downsview CYZD and Burlington Executive Airport (Burlington Airpark) CZBA. Buildings are cut off from the rest of the mesh, so all road and trees and minor buildings are from default autogen, leading to good blending of custom and autogen.

I left textures unbaked, as all my experiments with baking textures according to guides keep ending up with inferior look and much larger file size with the same FPS hit as hundreds of texture files. 8192×8192 bakes texture look very pixelated with this scenery size, and 16384×16384 produces packages that are 3 times larger, and still ahve weird artifacts. So I concluded that baking textures is counter-productive. However my LOD experiments eventually were successfull, so I’m implementing 3 LOD level leading to negligible FPS impact far from scenery, minimal impact when closer and moderate impact when very close. Note that on screenshots you can see FPS counter from a lowly GTX1660 GPU running a true 4K resolution. Based on this totally inadequate GPU regular FPS is around 28 FPS, with closer to scenery getting 26 FPS and extremely close down to 20-24 FPS. With a better GPU or 1080p/1440p resolution FPS impact should be minimal.

Distribution
This free creation contains content from Google Maps or Google Earth. In accordance with Google Terms of Services and especially point 2.2 of Google Maps/Google Earth Additional Terms of Service, this creation is based on « fair use » or « fair dealing » of the data provided by google throught its services. No commercial use or any gain is or will ever be made by the author of this creation, who doesn’t own anything regarding google assets but a simple user Licence. The author will not recieve any form of retribution for sharing his work. If this content would be found somewhere where it is provided in exchange of money or any kind of retribution, I would not be with the consent of the author.

As Google stated it cant answer to any direct demand about a particular creative use of its properties, like stated in the « written permission » paragraph of the same document, to verify if its complying with its Term of Services, and as it is economically unreasonable for the casual creator of this content to ask for a costly legal analysis of its creation like proposed in the « Fair use » paragraph of the document, the author of this creation will stop sharing it freely and destroy any trace of it at first demand from Google, in accordance with the paragraph « Taking action in case of problems » of the Google Terms of Service about « advance notice » provided « when reasonably possible ».

Are you looking for Microsoft Flight Simulator 2020 Mods at one place? Then you have landed in the right place. We provide the access to our huge database of mods for all kind of needs. Every Microsoft Flight Simulator 2020 Addons has its own type, specifications and features so it’s easy to find what you lack in your game. If you have already chosen the file, click on Greater Toronto Area Enhancement Pack v1.0 Mod download button and follow the instructions. It’s as easy and simple as possible! The Greater Toronto Area Enhancement Pack v1.0 mod will also allow your game number of things. There are still may other mods some of them are little tweaks like a camera changer while others introduce a whole new story mode into your game. Aside from that, we have mods introducing new content to the game, new levels developed by independent creators that will spark a ray of joy within your Flight Simulator. Greater Toronto Area Enhancement Pack v1.0 Mod could be a great boost to your game and there are no reasons why to react negatively. Take the best that you can and don’t look back – you must be orientated to the future and new experiences.