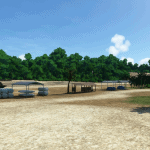 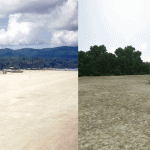 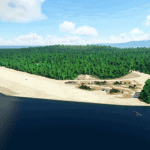 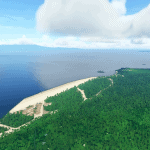 Between August 19-28, 1943 Japanese aircraft attacked Allied forces in the Barakoma area losing a considerable number of aircraft and Allied fighters and anti-aircraft claimed about 50 attackers. None of the raids did considerable damage. The last recorded Japanese raid was January 16, 1944 when four bombs were dropped three miles wide of the airfield. At night, harassment raids by Japanese interfered with, but did not stop the construction.

By October 25, 1943 the single runway measured 3,600 x 150′ and was oriented 322° x 142° with taxiways and revetments along the inland southwest edge of the runway. Also a road was constructed from the airfield northward passing Gill’s Plantation up to Lambu Lambu Cove and Horoniu.

Wartime History
On September 24, 1943 the first offical landing on the newly built runway was by VMF-214 “Black Sheep” F4U Corsairs piloted by Major Gregory “Pappy” Boyington and Mo Fisher. Many Marine F4U aces flew from Barakoma during its height.

Installation:
Extract and copy the “agba-barakoma_airfield” folder to your “Community” folder.

Known issues:
There is a very small part of an AI generated road at one end of the scenery. You won’t see the road, but since the SDK doesn’t allow removing AI generated traffic yet, it is probable, that civilian vehicles will enter restricted areas.

Are you looking for MSFS2020 Airports Mods at one place? Then you have landed in the right place. We provide the access to our huge database of mods for all kind of needs. Every MSFS2020 Airports Addons has its own type, specifications and features so it’s easy to find what you lack in your game. If you have already chosen the file, click on Airfields of WWII: Barakoma, Solomon Islands v1.0 Mod download button and follow the instructions. It’s as easy and simple as possible! The Airfields of WWII: Barakoma, Solomon Islands v1.0 mod will also allow your game number of things. There are still may other mods some of them are little tweaks like a camera changer while others introduce a whole new story mode into your game. Aside from that, we have mods introducing new content to the game, new levels developed by independent creators that will spark a ray of joy within your Flight Simulator. Airfields of WWII: Barakoma, Solomon Islands v1.0 Mod could be a great boost to your game and there are no reasons why to react negatively. Take the best that you can and don’t look back – you must be orientated to the future and new experiences.