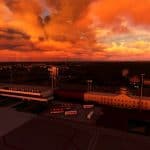 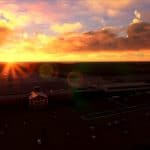 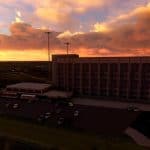 The history of the airport began with the first landing on February 24, 1918 by the pilot Turenko on the Anatra airplane. This flight along the route Odessa – Yekaterinoslav – Odessa is also considered “the first postal watering in Russia”[3].

1943, after the liberation from the Nazi invaders, Po-2 special-purpose aircraft were relocated to the territory of the airport near the village of Starye Kodaki.

Since 1946, 300 passengers have been transported through the airport, including Kharkov flights to Moscow, Kyiv, Odessa, carried out by Li-2 aircraft, and then Il-12. A few years later, their own An-2, Li-2, Il-14 aircraft were already in operation.

1957 the typical “pillared terminal” is put into operation.

In 1968, the laying of a green square at the airport began.

In 1974, a new modern air terminal for 800 passengers per hour was introduced.

1975 The airport is among the four best airports in the country nominated by the Ministry of Civil Aviation to become a model airport that meets world standards in its class.

Since 1976, it has begun to receive Tu-154 aircraft. Thanks to this, direct air communication is established with 70 cities of the former Soviet Union. By 1980, the volume of air transportation shipments amounted to 530,000 passengers and 20,000 tons of cargo.

In 1979, a 7-storey hotel with 240 rooms was put into operation with a restaurant and a range of services, as well as an electrical service building.

In the period from 1979 to 1983, the airport became the methodological base of Aeroflot and the region for the development and implementation of an integrated quality management system (QMS QMS). Standardization has undergone all the processes of managing the aviation activities of the enterprise.

In 1987, the runway was reconstructed and extended to 2850 meters. The airfield service received a DE-224 snowplow.

In 1992, the development of foreign flights on Yak-40 aircraft begins, flights to Cameroon, Yugoslavia, and Moldova take place.

1993 acquired the first medium-haul aircraft Yak-42, which contributed to the course for the operation of heavy aircraft.

In 1994, 6 Yak-42 aircraft were based at the airport. Aviation work is underway in Iran and Pakistan. International flights are opened from Dnepropetrovsk to Tel Aviv, Frankfurt am Main, Istanbul, Chisinau, Amsterdam, Dubai, Moscow, Samara, Tyumen.

During 2004-2006, the Dniproavia airline, based at the airport, purchased 2 Boeing 737 aircraft, which made it possible to jointly develop new destinations.

In 2005, the birch “Alley of the Victors in World War II” was blown up and a capsule with the “Appeal to the descendants of 2045 in honor of the 100th anniversary of the Victory” was laid in the wall of the headquarters building.

In 2007, the development of the airport development project began, including the construction of a new terminal in connection with the Euro 2012.

Since 2008, modern Embraer 145 and Embraer 190, Boeing 737, Bombardier CRJ and other aircraft have arrived at the airport to replace Yak-40 aircraft.

In 2010, an active stage of the reconstruction of the airport “Dnepropetrovsk” was launched.

2011 an independent enterprise Limited Liability Company “Dnepropetrovsk International Airport” was established. A modern hangar for servicing aircraft was built and equipped, work is underway to improve the territory of the airport and the station square, the reconstruction of the airfield, runway, passenger terminal is being designed.

In 2018, a discussion began on the reconstruction of the SPS and the terminal in the mode of public-private partnership. The State Budget for 2019 includes 200 million hryvnias for the construction of a new international airport “Pridneprovye” near the village of Solenoe, not far from the Dnieper[4], while funds for the repair of the ATP of the Dnipro airport proper were not provided for in the budget.

2019 the State budget for 2020 includes UAH 1 billion for the reconstruction of the airport. Among the planned works: the construction of a new ZPS on the site of the modern one, it should have been extended to 3.2 km. It is also planned to equip a new platform, taxiways, terminals and infrastructure[5].

On April 8, 2021, the Minister of Infrastructure of Ukraine Vladislav Krykliy announced that “the old name of the Dnipropetrovsk airport has finally remained in the past. 6].

Are you looking for MSFS2020 Airports Mods at one place? Then you have landed in the right place. We provide the access to our huge database of mods for all kind of needs. Every MSFS2020 Airports Addons has its own type, specifications and features so it’s easy to find what you lack in your game. If you have already chosen the file, click on UKDD DNEPR v1.0 Mod download button and follow the instructions. It’s as easy and simple as possible! The UKDD DNEPR v1.0 mod will also allow your game number of things. There are still may other mods some of them are little tweaks like a camera changer while others introduce a whole new story mode into your game. Aside from that, we have mods introducing new content to the game, new levels developed by independent creators that will spark a ray of joy within your Flight Simulator. UKDD DNEPR v1.0 Mod could be a great boost to your game and there are no reasons why to react negatively. Take the best that you can and don’t look back – you must be orientated to the future and new experiences.