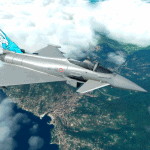 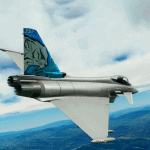 The Eurofighter Typhoon is a highly agile aircraft, designed to be a supremely effective dogfighter in combat. Later production aircraft have been increasingly better equipped to undertake air-to-surface strike missions and to be compatible with an increasing number of different armaments and equipment, including Storm Shadow and the RAF’s Brimstone. The Typhoon had its combat debut during the 2011 military intervention in Libya with the UK’s Royal Air Force and the Italian Air Force, performing aerial reconnaissance and ground-strike missions. The type has also taken primary responsibility for air-defence duties for the majority of customer nations.

Are you looking for MSFS2020 Liveries Mods at one place? Then you have landed in the right place. We provide the access to our huge database of mods for all kind of needs. Every MSFS2020 Liveries Addons has its own type, specifications and features so it’s easy to find what you lack in your game. If you have already chosen the file, click on 351st Flight XII Squadron Typhoon -Tiger Meet v0.1.0 Mod download button and follow the instructions. It’s as easy and simple as possible! The 351st Flight XII Squadron Typhoon -Tiger Meet v0.1.0 mod will also allow your game number of things. There are still may other mods some of them are little tweaks like a camera changer while others introduce a whole new story mode into your game. Aside from that, we have mods introducing new content to the game, new levels developed by independent creators that will spark a ray of joy within your Flight Simulator. 351st Flight XII Squadron Typhoon -Tiger Meet v0.1.0 Mod could be a great boost to your game and there are no reasons why to react negatively. Take the best that you can and don’t look back – you must be orientated to the future and new experiences.