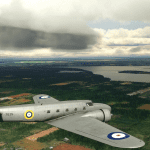 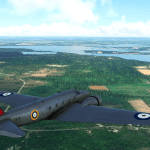 This folder contains a repaint for the Boeing 247 by Wing42. It shows Boeing 247 7635 of the RCAF. First RCAF Boeing 247, second 247D built. Ordered by Lufthansa, but became stuck in diplomatic issues and was stored at the Boeing factory for most of 1934 and 1935. Operated as executive transport by Phillips Petroleum from September 1935. Purchased second hand, was NC2666. Temporary registration CF-BRM used for ferry flight to Canada, registered to Canadian Department of Munitions and Supplies . Used by No. 121 Composite Squadron, Dartmouth, January 1942 to May 1942. To Canadian Pacific Airlines, as CF-BVZ, registered to them from 16 May 1942 to 1945. Had 4,868:00 logged time when sold in 1945 to Zimmerly Air Lines, registered as NC41819. To Empire Airlines on 28 September 1946. To Vest Aircraft of Denver, Colorado on 10 March 1948. Repaint by Jankees, based on the original textures by Wing42

Are you looking for MSFS2020 Liveries Mods at one place? Then you have landed in the right place. We provide the access to our huge database of mods for all kind of needs. Every MSFS2020 Liveries Addons has its own type, specifications and features so it’s easy to find what you lack in your game. If you have already chosen the file, click on Boeing 247 RCAF #7635 v1.0 Mod download button and follow the instructions. It’s as easy and simple as possible! The Boeing 247 RCAF #7635 v1.0 mod will also allow your game number of things. There are still may other mods some of them are little tweaks like a camera changer while others introduce a whole new story mode into your game. Aside from that, we have mods introducing new content to the game, new levels developed by independent creators that will spark a ray of joy within your Flight Simulator. Boeing 247 RCAF #7635 v1.0 Mod could be a great boost to your game and there are no reasons why to react negatively. Take the best that you can and don’t look back – you must be orientated to the future and new experiences.