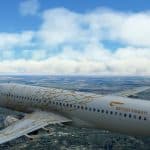 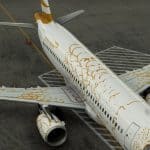 In 2012, British Airways unveiled the ‘Golden Dove’ livery which has been painted onto nine A319 aircraft as part of the carrier’s London 2012 celebrations. The aircraft operated in the repainted livery for a year, serving routes to and from Europe. Designer Pascal Anson, who was commissioned to create the livery as a result of BA’s Great Britons scheme (with mentoring by Tracey Emin), was inspired “by the idea that an aircraft can often look like a bird when in flight”

“The dove signifies a positive message wherever you go in the world,” said Anson. “I also hope it makes people stop, think and look twice too. It will be very special to see these aircraft in flight, and I hope that passengers, athletes and VIPs flying into the London 2012 Games will be very excited to be on this celebratory aircraft.” A special shade of gold paint has been used on the aircraft, with a team of 24 people taking eight days to spray paint the dove.

Personally, I found this a difficult livery to paint, although not as detailed as other liveries, trying to get the feather effects right took me longer than I had hoped for. For all those who download this livery, happy flying.

Are you looking for MSFS2020 Liveries Mods at one place? Then you have landed in the right place. We provide the access to our huge database of mods for all kind of needs. Every MSFS2020 Liveries Addons has its own type, specifications and features so it’s easy to find what you lack in your game. If you have already chosen the file, click on Fenix a320 British Airways ‘Golden Dove’ Livery v1.0 Mod download button and follow the instructions. It’s as easy and simple as possible! The Fenix a320 British Airways ‘Golden Dove’ Livery v1.0 mod will also allow your game number of things. There are still may other mods some of them are little tweaks like a camera changer while others introduce a whole new story mode into your game. Aside from that, we have mods introducing new content to the game, new levels developed by independent creators that will spark a ray of joy within your Flight Simulator. Fenix a320 British Airways ‘Golden Dove’ Livery v1.0 Mod could be a great boost to your game and there are no reasons why to react negatively. Take the best that you can and don’t look back – you must be orientated to the future and new experiences.