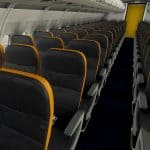 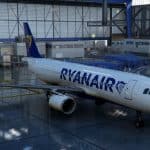 Love them or hate them, Ryanair will take you almost anywhere in Europe, whether it be to Cork or Paphos, you’ll be sure of a cheap flight, albeit you’ll pay for extras. Currently, as some low-cost airlines are struggling with staffing levels, Ryanair seems to have it covered, with few flights being cancelled. With a fleet of All Boeing aircraft, consisting of around 472 aircraft, made up of 409 x 737-800 and 59 of the new 737 Max 800s. Ryanair also placed further orders for additional aircraft to replace their older 800s. Deliveries are scheduled to run through 2025, helping the airline grow its fleet from around 470 aircraft last year to 600 by the summer of 2025. They also have 3 x Learjet LJ45, which are used for corporate and moving parts for short notice maintenance. I doubt if O’Leary will ever which to Airbus, but this is what it would look like in their standard livery.

Are you looking for MSFS2020 Liveries Mods at one place? Then you have landed in the right place. We provide the access to our huge database of mods for all kind of needs. Every MSFS2020 Liveries Addons has its own type, specifications and features so it’s easy to find what you lack in your game. If you have already chosen the file, click on Fenix A320 RYANAIR With Cabin Interior v1.0 Mod download button and follow the instructions. It’s as easy and simple as possible! The Fenix A320 RYANAIR With Cabin Interior v1.0 mod will also allow your game number of things. There are still may other mods some of them are little tweaks like a camera changer while others introduce a whole new story mode into your game. Aside from that, we have mods introducing new content to the game, new levels developed by independent creators that will spark a ray of joy within your Flight Simulator. Fenix A320 RYANAIR With Cabin Interior v1.0 Mod could be a great boost to your game and there are no reasons why to react negatively. Take the best that you can and don’t look back – you must be orientated to the future and new experiences.