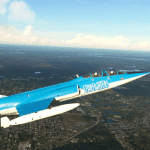 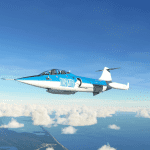 This folder contains a repaint for the Lockheed TF-104G by SkySimWorks for MSFS2020. It shows CF-104D c/n 5302 N104RB of Starfighters Aerospace, which used to be based at Kennedy Space Centre, Florida. N104RB is a former Royal Canadian Air Force trainer, built in 1962. It was sold to the Norwegian Air Force in 1973, and retired it in 1982. In 1988 it was brought to the US, restored and first flown in 1989 as N104NL. It went to Thunderbird Aviation in 1994, who registered it as N166TB. In 1996 it was sold again to Rick Svetkoff, who started the Starfighter demonstartion team in Florida. It was restored, reregistered to N104RB, after the owner and his wife, Rick and Barbara. In 1998 it received the blue/white scheme depicted here, and flown in this scheme until 2017. In 2019, it was donated to the Royal Air Museum in Bonifay, FL. Repaint by Jan Kees Blom, based on the original textures by SSW.

Are you looking for MSFS2020 Liveries Mods at one place? Then you have landed in the right place. We provide the access to our huge database of mods for all kind of needs. Every MSFS2020 Liveries Addons has its own type, specifications and features so it’s easy to find what you lack in your game. If you have already chosen the file, click on Lockheed TF-104 N104RB v1.0 Mod download button and follow the instructions. It’s as easy and simple as possible! The Lockheed TF-104 N104RB v1.0 mod will also allow your game number of things. There are still may other mods some of them are little tweaks like a camera changer while others introduce a whole new story mode into your game. Aside from that, we have mods introducing new content to the game, new levels developed by independent creators that will spark a ray of joy within your Flight Simulator. Lockheed TF-104 N104RB v1.0 Mod could be a great boost to your game and there are no reasons why to react negatively. Take the best that you can and don’t look back – you must be orientated to the future and new experiences.