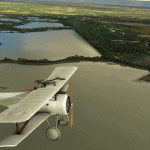 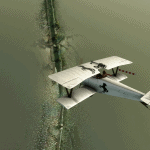 This folder contains a repaint for the Nieuport 17 by BigRadials in MSFS2020. It shows Nieuport 17 as flown by Captain Count Francesco Baracca of 50 squadriglia, Italian Air Force, summer 1917. The son of wealthy landowners, Baracca served with the cavalry before the war, but an interest in aviation led to his obtaining his pilots license in Reims in 1912. When Italy joined the war, he went to France to train on Nieuports. He scored his first (and Italy’s first) aerial victory on 7 April 1916. It was around this time that he applied the symbol of a prancing horse to his aircraft, which came from his family’s coat of arms and which was applied to reflect his time with the cavalry. He continued scoring victories, with 34 being his final score. He was killed while on a strafing mission near Montello on 19 June 1918.
Several airfields, including Bolzano airport are named after Baracca, and the symbol of the prancing horse was later presented to Enzo Ferrari to use as the symbol of his racing team Scuderia Ferrari since 1929, and later of the Ferrari automobile company.

Repaint by Jan Kees Blom, based on the paintkit supplied by Big Radials.

Are you looking for MSFS2020 Liveries Mods at one place? Then you have landed in the right place. We provide the access to our huge database of mods for all kind of needs. Every MSFS2020 Liveries Addons has its own type, specifications and features so it’s easy to find what you lack in your game. If you have already chosen the file, click on Nieuport 17 Italian Air Force Capt Francesco Baracca v1.0 Mod download button and follow the instructions. It’s as easy and simple as possible! The Nieuport 17 Italian Air Force Capt Francesco Baracca v1.0 mod will also allow your game number of things. There are still may other mods some of them are little tweaks like a camera changer while others introduce a whole new story mode into your game. Aside from that, we have mods introducing new content to the game, new levels developed by independent creators that will spark a ray of joy within your Flight Simulator. Nieuport 17 Italian Air Force Capt Francesco Baracca v1.0 Mod could be a great boost to your game and there are no reasons why to react negatively. Take the best that you can and don’t look back – you must be orientated to the future and new experiences.