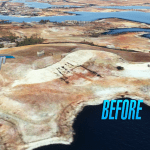 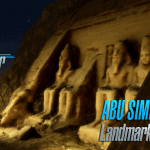 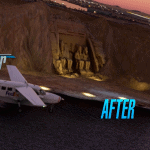 ABU SIMBEL TEMPLE V1.0 by Sergio Del Rosso
Thanks so much to everyone who appreciates me and supports my passion for making these scenarios. If you liked it, just a comment, if you want to donate something like a coffee I’m happy anyway and can help me to improve this scenery.

The Abu Simbel temples are two massive rock-cut temples at Abu Simbel (Arabic: أبو سمبل‎), a village in Aswan Governorate, Upper Egypt, near the border with Sudan. They are situated on the western bank of Lake Nasser, about 230 km (140 mi) southwest of Aswan (about 300 km (190 mi) by road). The complex is part of the UNESCO World Heritage Site known as the “Nubian Monuments”,[1] which run from Abu Simbel downriver to Philae (near Aswan). The twin temples were originally carved out of the mountainside in the 13th century BC, during the 19th Dynasty reign of the Pharaoh Ramesses II. They serve as a lasting monument to the king and his queen Nefertari, and commemorate his victory at the Battle of Kadesh. Their huge external rock relief figures have become iconic.
The complex was relocated in its entirety in 1968 under the supervision of a Polish archaeologist, Kazimierz Michałowski, from the Polish Centre of Mediterranean Archaeology University of Warsaw,[2] on an artificial hill made from a domed structure,high above the Aswan High Dam reservoir. The relocation of the temples was necessary or they would have been submerged during the creation of Lake Nasser, the massive artificial water reservoir formed after the building of the Aswan High Dam on the River Nile. The project was carried out as part of the UNESCO Nubian Salvage Campaign.[1][2]

Are you looking for MSFS2020 Scenery Mods at one place? Then you have landed in the right place. We provide the access to our huge database of mods for all kind of needs. Every MSFS2020 Scenery Addons has its own type, specifications and features so it’s easy to find what you lack in your game. If you have already chosen the file, click on Abu Simbel Temple (Egypt) v1.0 Mod download button and follow the instructions. It’s as easy and simple as possible! The Abu Simbel Temple (Egypt) v1.0 mod will also allow your game number of things. There are still may other mods some of them are little tweaks like a camera changer while others introduce a whole new story mode into your game. Aside from that, we have mods introducing new content to the game, new levels developed by independent creators that will spark a ray of joy within your Flight Simulator. Abu Simbel Temple (Egypt) v1.0 Mod could be a great boost to your game and there are no reasons why to react negatively. Take the best that you can and don’t look back – you must be orientated to the future and new experiences.