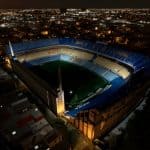 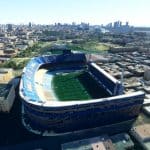 The Alberto J. Armando Stadium is an association football stadium located in La Boca district of Buenos Aires. Widely known as La Bombonera (English: The chocolate box) due to its shape, with a “flat” stand on one side of the pitch and three steep stands round the rest of the stadium. It has a capacity of 54,000.

The stadium is owned by Boca Juniors, one of Argentina’s top football clubs, The unusual shape of the stadium has led to it having excellent acoustics and the Boca support being nicknamed “La Doce (The 12th man”). The pitch at La Bombonera is the minimum size required under FIFA regulations – 105m x 68m.

The stadium is widely regarded as one of the most emblematic stadiums of the world, and has been declared of public interest by the Government of Buenos Aires autonomous city.

INSTALLATION: Drag the folder in ZIP to your Community folder.

Are you looking for MSFS2020 Scenery Mods at one place? Then you have landed in the right place. We provide the access to our huge database of mods for all kind of needs. Every MSFS2020 Scenery Addons has its own type, specifications and features so it’s easy to find what you lack in your game. If you have already chosen the file, click on Estadio La Bombonera v1.0 Mod download button and follow the instructions. It’s as easy and simple as possible! The Estadio La Bombonera v1.0 mod will also allow your game number of things. There are still may other mods some of them are little tweaks like a camera changer while others introduce a whole new story mode into your game. Aside from that, we have mods introducing new content to the game, new levels developed by independent creators that will spark a ray of joy within your Flight Simulator. Estadio La Bombonera v1.0 Mod could be a great boost to your game and there are no reasons why to react negatively. Take the best that you can and don’t look back – you must be orientated to the future and new experiences.