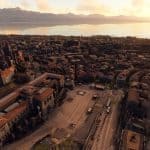 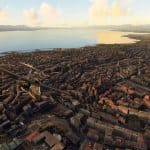 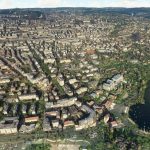 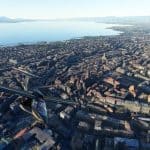 Lausanne is the capital city and biggest town of the canton of Vaud in Romandy, Switzerland. A municipality, it is situated on the shores of Lake Léman (French: Le/Lac Léman). It faces the French town of Évian-les-Bains, with the Jura Mountains to its north-west. Lausanne is located 62 kilometres (38.5 miles) northeast of Geneva.

The municipality Lausanne has a population of about 140,000, making it the fourth largest city in Switzerland, with the entire agglomeration area having about 420,000 inhabitants (as of January 2019). The metropolitan area of Lausanne-Geneva (including Vevey-Montreux, Yverdon-les-Bains, and foreign parts) was over 1.2 million inhabitants in 2000.

Lausanne is a focus of international sport, hosting the International Olympic Committee (which has recognized the city as the “Olympic Capital” since 1994), the Court of Arbitration for Sport and some 55 international sport associations. It lies in a noted wine-growing region. The city has a 28-station metro system, making it the smallest city in the world to have a rapid transit system. Lausanne hosted the 2020 Winter Youth Olympics.

Known bugs and issues:
because the photogrammetry data have been retrieved in winter, photogrammetry trees seem to be burnt (they do not have their leafs)
somme traffic issues in the old town

Are you looking for MSFS2020 Scenery Mods at one place? Then you have landed in the right place. We provide the access to our huge database of mods for all kind of needs. Every MSFS2020 Scenery Addons has its own type, specifications and features so it’s easy to find what you lack in your game. If you have already chosen the file, click on Lausanne, Switzerland v1.0 Mod download button and follow the instructions. It’s as easy and simple as possible! The Lausanne, Switzerland v1.0 mod will also allow your game number of things. There are still may other mods some of them are little tweaks like a camera changer while others introduce a whole new story mode into your game. Aside from that, we have mods introducing new content to the game, new levels developed by independent creators that will spark a ray of joy within your Flight Simulator. Lausanne, Switzerland v1.0 Mod could be a great boost to your game and there are no reasons why to react negatively. Take the best that you can and don’t look back – you must be orientated to the future and new experiences.