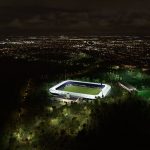 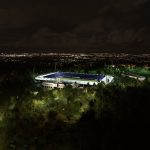 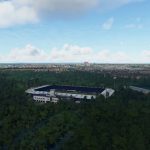 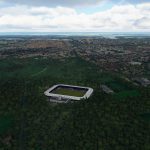 Stadion de Goffert
The Goffertstadion (Dutch pronunciation: [ˈɣɔfərtstaːdijɔn]), formerly known as McDOS Goffertstadion [mɑɡˈdɔs ˌxɔf-] for sponsorship reasons, is a football stadium in Nijmegen, Netherlands, located in the Goffertpark. It is home to football club NEC. The stadium was opened on 8 July 1939 by Prince Bernhard of The Netherlands.

Since 1951 the opening of the International Four Days Marches Nijmegen, the so-called Vlaggenparade, a parade with the national flags of all participants is held in the stadium.

On 19 October 1983 NEC played a UEFA Cup Winners’ Cup match against FC Barcelona, still seen as the most important match ever played in the Goffertstadion.

It was rebuilt into a modern stadium with all seats covered and heated and updated catering facilities. The first home-match in the new stadium took place in September 1999. The grand re-opening was on 25 January 2000.

One of the many advantages the renovated stadium offers is the improved atmosphere because the spectators are now situated much closer to the playing ground. Because of this the players have a better interaction with the crowd.

The playing ground and the rest of the stadium are separated from each other by a promenade which is situated under the spectators’ seats. This promenade has a double function: It prevents supporters from entering the playing ground while at the same time containing food and beverage outlets as well as toilets.

In November 2007 the board of NEC and the city of Nijmegen presented new plans for De Goffert. The capacity is intended to be increased to 20,000 and the stadium will be placed largely underground inside a large hill.[1] This hill will also serve as a home for basketball (Matrixx Magixx), judo and other sports, creating a ‘House of Topsports’. The strange, but innovative, design is needed because the city will not allow the stadium to grow in height because of the Goffert Park, which is a protected nature-site.

The Nijmegen venue hosted three international matches of the Dutch national football team in the 1970s, with the last being a qualifying match for Euro 1980 on 20 September 1978 against Iceland: 3–0. The goals were scored by Ruud Krol, Ernie Brandts and Rob Rensenbrink (penalty).

Are you looking for MSFS2020 Scenery Mods at one place? Then you have landed in the right place. We provide the access to our huge database of mods for all kind of needs. Every MSFS2020 Scenery Addons has its own type, specifications and features so it’s easy to find what you lack in your game. If you have already chosen the file, click on Nijmegen – Stadium The Goffert – Home of N.E.C. v1.0 Mod download button and follow the instructions. It’s as easy and simple as possible! The Nijmegen – Stadium The Goffert – Home of N.E.C. v1.0 mod will also allow your game number of things. There are still may other mods some of them are little tweaks like a camera changer while others introduce a whole new story mode into your game. Aside from that, we have mods introducing new content to the game, new levels developed by independent creators that will spark a ray of joy within your Flight Simulator. Nijmegen – Stadium The Goffert – Home of N.E.C. v1.0 Mod could be a great boost to your game and there are no reasons why to react negatively. Take the best that you can and don’t look back – you must be orientated to the future and new experiences.