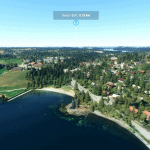 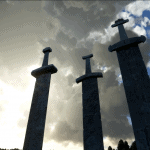 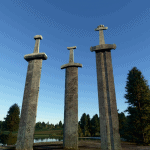 Sverd i fjell (English: Swords in Rock) is a commemorative monument located in the Hafrsfjord neighborhood of Madla, a borough of the city of Stavanger which lies in the southwestern part of the large municipality of Stavanger in Rogaland county, Norway.

The monument was created by sculptor Fritz Røed from Bryne and was unveiled by King Olav V of Norway in 1983. The three bronze swords stand 10 metres (33 ft) tall and are planted into the rock of a small hill next to the fjord. They commemorate the historic Battle of Hafrsfjord which by tradition took place there in the year 872, when King Harald Fairhair gathered all of Norway under one crown. The largest sword represents the victorious Harald, and the two smaller swords represent the defeated petty kings. The monument also represents peace, since the swords are planted into solid rock, so they may never be removed.

The monument was featured in the 2005 documentary, Metal: A Headbanger’s Journey, when Sam Dunn traveled to Norway to document on Norwegian black metal.
It also gives its name to the closing track on the Leaves’ Eyes album King of Kings.
The monument cameos in the animated television series Steven Universe with the location known as the Gem Battlefield being loosely based on the concept and location of Sverd i fjell.
It is featured in German painter Werner Büttner’s 2012 painting Kriegergroupies and also features as the symbol of Norway in Duolingo’s Norwegian language programme.

The monument has been manually recreated from various photos and videos from the internet. It comes with its own lights and POI.

This mod is not intended for sale or resale.

Are you looking for MSFS2020 Scenery Mods at one place? Then you have landed in the right place. We provide the access to our huge database of mods for all kind of needs. Every MSFS2020 Scenery Addons has its own type, specifications and features so it’s easy to find what you lack in your game. If you have already chosen the file, click on Sverd i fjell v0.1 Mod download button and follow the instructions. It’s as easy and simple as possible! The Sverd i fjell v0.1 mod will also allow your game number of things. There are still may other mods some of them are little tweaks like a camera changer while others introduce a whole new story mode into your game. Aside from that, we have mods introducing new content to the game, new levels developed by independent creators that will spark a ray of joy within your Flight Simulator. Sverd i fjell v0.1 Mod could be a great boost to your game and there are no reasons why to react negatively. Take the best that you can and don’t look back – you must be orientated to the future and new experiences.