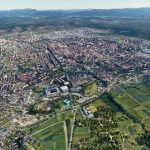 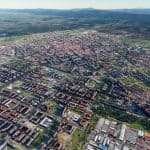 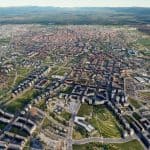 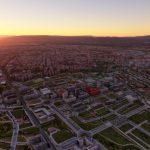 Spanish city, capital of the province of Álava, located in the center of the Llanada de Vitoria, it is located on a mound that dominates the Zadorra valley. The city, which was an agricultural center, has become a notable industrial and commercial hub. Alongside the classic food and agriculture industries, metallurgical processing industries, agricultural machinery and automobiles have developed. The designation as the seat of the Basque government has increased the weight of the administration. It was founded by Sancho I of Navarra in 1181. Alfonso VIII incorporated it to Castile, maintaining its privileges. During the s. XV suffered internal struggles between the Calleja and the Ayala. It began a period of decline in the s. XVI (expulsion of the Jews and war of the communities), from which it would not recover until the s. XVIII. In 1976, the Statute of Autonomy of the Basque Country was approved by referendum, which endowed Euskadi with a Basque government and parliament.

Vitoria Gasteiz is internationally known for being one of the most accessible and green cities in Europe, an aspect that, together with its cultural and historical richness, make it one of the most interesting spaces in the Basque Country. An urban nucleus, which we recommend you visit during any trip to Euskadi.

Taking as a reference the impressive medieval almond, the historic center of Vitoria Gasteiz, we will make a route through each and every one of the tourist attractions of the city. A tour that will take us to know both the interior and the exterior of the old walls that protected the city. Vitoria Gasteiz, capital of the province of Álava (Araba in Euskera) and of the autonomous community of Euskadi itself, is known throughout the Basque Country for its quality of life, its large green spaces, its gastronomy and of course, for its great culture and history.

Are you looking for MSFS2020 Scenery Mods at one place? Then you have landed in the right place. We provide the access to our huge database of mods for all kind of needs. Every MSFS2020 Scenery Addons has its own type, specifications and features so it’s easy to find what you lack in your game. If you have already chosen the file, click on Vitoria-Gasteiz city, Spain v1.0 Mod download button and follow the instructions. It’s as easy and simple as possible! The Vitoria-Gasteiz city, Spain v1.0 mod will also allow your game number of things. There are still may other mods some of them are little tweaks like a camera changer while others introduce a whole new story mode into your game. Aside from that, we have mods introducing new content to the game, new levels developed by independent creators that will spark a ray of joy within your Flight Simulator. Vitoria-Gasteiz city, Spain v1.0 Mod could be a great boost to your game and there are no reasons why to react negatively. Take the best that you can and don’t look back – you must be orientated to the future and new experiences.