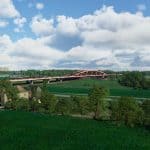 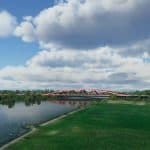 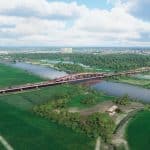 Hanzeboog
The Hanzeboog is a railway bridge near Zwolle over the river IJssel and is part of the Utrecht – Kampen and Lelystad – Zwolle railway line. The bridge was opened in June 2011.

Due to the construction of the Hanze line, a new river crossing was needed to replace the old bridge. After a long discussion, a new bridge was chosen instead of a tunnel. The new railway bridge is located at Rhine height, making it easier for shipping to pass and eliminating the need for a movable section. The design is by Quist Wintermans Architekten.

The new bridge is located a few tens of meters upstream from the old one and consists of a double track and a cycle path. The railway bridge, which has been given the name Hanzeboog, [1] has a length of 1 kilometer and rests on 18 concrete pillars, which gives the water more space at high water levels.

On June 10, 2011, the last train passed over the old bridge, with the overhead wires being removed in the following weeks. The demolition of the bridge started on September 12, whereby the pillar on the Hattem side, the lifting wheels of the bridge dating from 1936 and part of the route with underpass on the Zwolle side (with a memorial stone from 1905) were preserved as a monument. [3] [4]

The still present ‘first stone’, laid on October 7, 1862 by the Zwolle-born minister Thorbecke, was removed from the abutment to be demolished and walled into the pillar. [5] The restored plaque was unveiled exactly 150 years later, on October 7, 2012. A small part of the old railway embankment is still there. The municipality of Zwolle has created a picnic area on the old railway embankment, which also has a piece of track, including rails.

Are you looking for MSFS2020 Scenery Mods at one place? Then you have landed in the right place. We provide the access to our huge database of mods for all kind of needs. Every MSFS2020 Scenery Addons has its own type, specifications and features so it’s easy to find what you lack in your game. If you have already chosen the file, click on Zwolle – Railway Bridge Hanzeboog (red color) v1.0 Mod download button and follow the instructions. It’s as easy and simple as possible! The Zwolle – Railway Bridge Hanzeboog (red color) v1.0 mod will also allow your game number of things. There are still may other mods some of them are little tweaks like a camera changer while others introduce a whole new story mode into your game. Aside from that, we have mods introducing new content to the game, new levels developed by independent creators that will spark a ray of joy within your Flight Simulator. Zwolle – Railway Bridge Hanzeboog (red color) v1.0 Mod could be a great boost to your game and there are no reasons why to react negatively. Take the best that you can and don’t look back – you must be orientated to the future and new experiences.