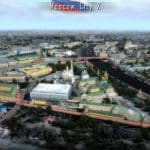 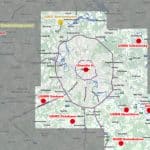 Moscow City X Demo is a very detailed model of Moscow metropolitan area in Russia, together with lite sceneries of 7 airports (UUWW Vnukovo, UUDD Domodedovo, UUBW Zhukovski, UUMO Ostafyevo, UUBM Myachkovo and UUMB Kubinka), many heliports and thousands of buildings. This product is fully compatible with FSX, FSX SE and all versions of Prepar3D. It’s a fully functional DEMO version of the commercial payware product, copmatible with both UUEE Moscow Sheremetyevo X by Drzewiecki Design and UUDD Moscow Domodedovo FSX/P3D by MDesign. It features same airport layout as in the full version but with limited 3D objects and low resolution textures. Using this free demo ensures no problems with online (VATSIM, IVAO, multiplayer etc.) flying in case some users use the payware scenery and some don’t. Moscow is the capital city and the most populous federal subject of Russia. It’s the second most populous city in Europe after Istanbul and the 8th largest city proper in the world, as well as the largest amongst high income economies. It’s equipped with an automatic installer, which means that the scenery will be automatically added to the Flight Simulator Scenery Library. Please uninstall all previous versions of the airports included in this package that you may have installed before. Please make also sure that no duplicated AFCAD files are installed! Enjoy your virtual flying with Drzewiecki Design!

Are you looking for Prepar3D Mods at one place? Then you have landed in the right place. We provide the access to our huge database of mods for all kind of needs. Every Prepar3D Addons has its own type, specifications and features so it’s easy to find what you lack in your game. If you have already chosen the file, click on Moscow City X Demo Mod download button and follow the instructions. It’s as easy and simple as possible! The Moscow City X Demo mod will also allow your game number of things. There are still may other mods some of them are little tweaks like a camera changer while others introduce a whole new story mode into your game. Aside from that, we have mods introducing new content to the game, new levels developed by independent creators that will spark a ray of joy within your Flight Simulator. Moscow City X Demo Mod could be a great boost to your game and there are no reasons why to react negatively. Take the best that you can and don’t look back – you must be orientated to the future and new experiences.