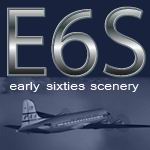 FS2004 Amsterdam Schiphol 1963 Package. We have tried to reflect something of the atmosphere and feel of that period, prior to the all jet era of today. This scenery is as detailed as possible because we found it essential to reproduce certain buildings and surroundings that were so typical for Schiphol Amsterdam. It will show the platforms, hangars, tower and terminal of the old airport but also the Fokker aircraft factory and the building area of the “new” Schiphol Centre under construction. by Jaap de Baare, Wolfgang Gersch and Harry Biard. 13.2MB