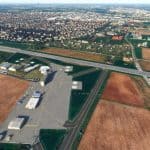 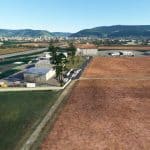 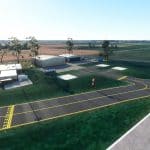 The airfield was closed in 2013 when the USAREUR headquarters were relocated to Wiesbaden. A further use of the military airfield as a civil airfield was unlikely due to the dangerous and difficult approach from the east and the relatively short runway. In addition, the district road 9706 crosses the eastern part of the runway 08/26. In addition, some of the residents of the neighboring Heidelberg district of Pfaffengrund have already complained about aircraft noise in the past. Since it was converted into a heliport, the airfield has only been used in the context of emergency medical aid or public safety measures, as well as for operations to support the surrounding US Army facilities
In the end, the head of the USAREUR / 7A Army Aviation Department was responsible for managing the heliport. Originally the 207th Aviation Regiment was stationed in Heidelberg, which, however, was renamed the 214th Aviation Company, before it was again connected to the 12th Combat Army Aviation Brigade in 2006

I have som great memories for the US. Amry in Heidelberg. Thank you guys.

I didn’t mark the airport as closed. Because it’s a great Airport with alot of memories.

Issues:
Taxiways are not cool.
Start on RW 28 is a desaster

Are you looking for MSFS2020 Airports Mods at one place? Then you have landed in the right place. We provide the access to our huge database of mods for all kind of needs. Every MSFS2020 Airports Addons has its own type, specifications and features so it’s easy to find what you lack in your game. If you have already chosen the file, click on Heidelberg Army Airfield – ETIE v1.0 Mod download button and follow the instructions. It’s as easy and simple as possible! The Heidelberg Army Airfield – ETIE v1.0 mod will also allow your game number of things. There are still may other mods some of them are little tweaks like a camera changer while others introduce a whole new story mode into your game. Aside from that, we have mods introducing new content to the game, new levels developed by independent creators that will spark a ray of joy within your Flight Simulator. Heidelberg Army Airfield – ETIE v1.0 Mod could be a great boost to your game and there are no reasons why to react negatively. Take the best that you can and don’t look back – you must be orientated to the future and new experiences.