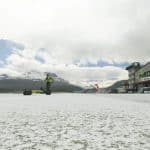 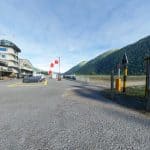 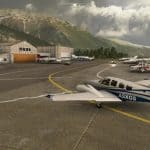 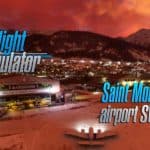 THANKS:special thanks to Stratus903D without his help this scenario would not have been the same.

KNOW BUG: + in the sky along the main road there are UFO LIGHT. Its a FS2020 bug, and not a Bug generated by this package.+ in the main parking, FS2020 continue to generate and spawn cars withour logic.

Samedan Airport (IATA: SMV, ICAO: LSZS), also known as Engadin Airport, is a regional airport in Samedan in the Engadin valley of Switzerland, 5 km from St. Moritz.
At the end of World War II, Swiss authorities identified existing locations that were to be modernized as regional airports, a second tier of infrastructure to support the primary urban airports, with Samedan being one of the five.

FacilitiesThe airport has one runway designated 03/21 with an asphalt pavement measuring 1800 x 40 metres (5905 x 130 ft).[1][2][3] Because of its location at the bottom of a valley, it is not equipped with an instrument landing system.

OperationsAt an elevation of 1,707 metres (5,600 ft), it is the highest airliner airport in Europe (with Courchevel being the highest for STOL aircraft only). It is also considered one of the most challenging airports in the world because of its difficult topography and winds, and because of the thinness of the air at its altitude.

The airport does not have any scheduled passenger flights (the nearest such airports are Lugano, 185 km/115 mi and Zürich, 220 km/135 mi distance by road). Much of its traffic consists of light to heavy general aviation traffic, including many private-corporate jets, private propeller aircraft, and the fleet of Swiss Jet. One of the biggest planes seen there, more often than not, is the HK Co.’s 737-200 or the A319. The takeoff generally requires the spooling up of engines, with brakes on, to minimize the time on the runway while maximizing as much speed possible. This technique is generally performed by bigger aircraft, with heavier payload.

Are you looking for MSFS2020 Airports Mods at one place? Then you have landed in the right place. We provide the access to our huge database of mods for all kind of needs. Every MSFS2020 Airports Addons has its own type, specifications and features so it’s easy to find what you lack in your game. If you have already chosen the file, click on Saint Moritz – Samedan Airport LSZS v1.0 Mod download button and follow the instructions. It’s as easy and simple as possible! The Saint Moritz – Samedan Airport LSZS v1.0 mod will also allow your game number of things. There are still may other mods some of them are little tweaks like a camera changer while others introduce a whole new story mode into your game. Aside from that, we have mods introducing new content to the game, new levels developed by independent creators that will spark a ray of joy within your Flight Simulator. Saint Moritz – Samedan Airport LSZS v1.0 Mod could be a great boost to your game and there are no reasons why to react negatively. Take the best that you can and don’t look back – you must be orientated to the future and new experiences.