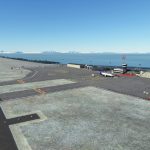 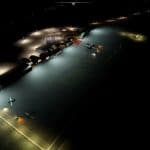 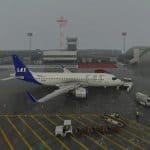 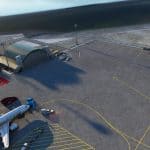 Quick update:
-Invisible taxiways have been linked to the parking on the east side of the apron and to the fuel ramp
-ILS glide slopes have been swapped as I made a typo in the original, now they are as I stated in the description below and I hope ILS 28 doesn’t send you into a mountain
-More props have been added around the airport (a different fuel station spawns next to the fuel ramp (99) everytime you load the game and I gave it enough space so it looks normal each time)
-The beacon next to the tower has been moved so the controllers can see out their windows
-A radar has been added to the northwest corner of the airfield
-Some props have been added (based on google maps terrible image) to the coastline east of the airfield, like a boat and piles of containers and conduit and stuff
-Some unionized Norwegian airport workers are now standing around doing nothing while being paid like 10,000NOK per hour (just kidding, they deserve the break and I would have to be paid pretty well also to live in Svalbard during the winter)
-Most importantly, a polar bear is now rummaging somewhere so be careful

Description:
I created the airport in Longyearbyen, Svalbard, Norway because it wasn’t on the map. It’s not perfectly accurate and I used some random custom building objects I found in the SDK which I thought were appropriate for the airport. I also used a lot of props. Tower works and ILS is good enough to get you to the ground. The VFR map doesn’t work this far north but you can still load a flight plan to Tromso or Oslo-Gardermoen with a direct departure and the autopilot will take you back to civilization. (There are some buggy things like road traffic driving on the roof of one of the buildings that I couldn’t figure out how to stop but the airport is functional).

Tower on 119.85, ILS 28 on 109.5 with a 6.3 degree glideslope (you might hit a mountain while landing, I might need to fix that but it would require a very steep glide slope). ILS 10 on 110.3 with a normal 3 degree glideslope. The ILS antennas are before the runway so you can use ILS to get close in bad weather, and then use the PAPI lights to guide you.

Also, if anyone would like to tell me how to remove the pushback tugs from “Gate A1, A2, and A3” and change where the ground power unit is parked, I would appreciate it because these ramps don’t require them and it annoys me that I have to taxi through them on the way to the runway.

Are you looking for MSFS2020 Airports Mods at one place? Then you have landed in the right place. We provide the access to our huge database of mods for all kind of needs. Every MSFS2020 Airports Addons has its own type, specifications and features so it’s easy to find what you lack in your game. If you have already chosen the file, click on Svalbard Airport ENSB v1.1 Mod download button and follow the instructions. It’s as easy and simple as possible! The Svalbard Airport ENSB v1.1 mod will also allow your game number of things. There are still may other mods some of them are little tweaks like a camera changer while others introduce a whole new story mode into your game. Aside from that, we have mods introducing new content to the game, new levels developed by independent creators that will spark a ray of joy within your Flight Simulator. Svalbard Airport ENSB v1.1 Mod could be a great boost to your game and there are no reasons why to react negatively. Take the best that you can and don’t look back – you must be orientated to the future and new experiences.