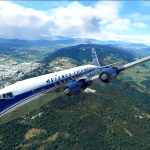 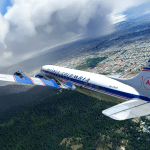 How to install?
1. Download and unzip the .PTP file from this post.
2. open the PDMG Operation Center on the top go to “aircraft and liveries” and select “Livery Utilities”
3. In the lower left corner Click on the “Install from PTP file” button
4. An explorer window has opened, find the folder where your downloads unzip .PTP file is.
6. open the “oliveiralberto_pmdg-aircraft-Austral.ptp”
7. wait for the Operations Center to do its job, and you will receive a message with the successful installation.

Thank to Capitan Cabal to make this project Posible.

Comments or donations are always welcome and greatly appreciated

Avianca S.A. (acronym in Spanish for Aerovias del Continente Americano S.A., “Airways of the American Continent”) is a Colombian airline. It has been the flag carrier of Colombia since 5 December 1919, when it was initially registered under the name SCADTA. It is headquartered in Bogotá, D.C. with its main hub at El Dorado International Airport. Avianca is the flagship of a group of eight Latin American airlines, whose operations are combined to function as one airline using a codesharing system. Avianca is the largest airline in Colombia and second largest in Latin America, after LATAM of Chile. Avianca and its subsidiaries have the most extensive network of destinations in Latin America. Prior to the merger with TACA in 2010, it was wholly owned by Synergy Group S.A., a South American holding company established by Germán Efromovich and specialising in air transport. It is listed on the Colombia Stock Exchange.

Through SCADTA, Avianca is the world’s second oldest extant airline after KLM, and celebrated its 100th anniversary in December 2019. It is the oldest airline in the Western Hemisphere. It became an official member of Star Alliance on 21 June 2012, after a process that lasted approximately 18 months from the initial announcement of its invitation to join the alliance. On May 10, 2020, Avianca filed for Chapter 11 bankruptcy in a court in New York City, and liquidated its subsidiary Avianca Peru, becoming one of the major airlines to have filed for bankruptcy due to the COVID-19 pandemic crisis.

Are you looking for MSFS2020 Liveries Mods at one place? Then you have landed in the right place. We provide the access to our huge database of mods for all kind of needs. Every MSFS2020 Liveries Addons has its own type, specifications and features so it’s easy to find what you lack in your game. If you have already chosen the file, click on Avianca v1.0 Mod download button and follow the instructions. It’s as easy and simple as possible! The Avianca v1.0 mod will also allow your game number of things. There are still may other mods some of them are little tweaks like a camera changer while others introduce a whole new story mode into your game. Aside from that, we have mods introducing new content to the game, new levels developed by independent creators that will spark a ray of joy within your Flight Simulator. Avianca v1.0 Mod could be a great boost to your game and there are no reasons why to react negatively. Take the best that you can and don’t look back – you must be orientated to the future and new experiences.