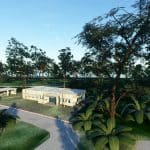 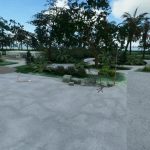 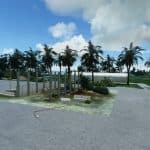 Canton Airports historie started with the arrival of Pan Amerian World Airways in May 1939 to build a station for there Flying Boat, the Flying Clipper (B314) enroute to New Zealand.
WW2 stopped the civilian routes across the Pacific, but the US Navy built the airports as we know it of today, and Canton became an important strategic point in the region.
After the war Pan-Am resumed there operation, now with DC-4 aircrafts on a route Sydney-Auckland-Fiji-Canton-Honolulu-San Fransisco-Vancouver, and a full scale community grew up on
Canton Island with a hotel,school for the personels children, a medical dispensary, powerstation, postoffice aso.
The arrival of the long range Jets finally putted an end to the Cantons role as an important stopover and refueling station, and the community was slowly disintegrated. By the end of 1965 Pan-Am stopped there flights from the island, and thereafter it was only used by US Space and Missile activities. In 1976 the last English and US personel left the island.

Today Canton Lays silent and Uninhabited, but the airfield still serves as EMM field for Airliners passing the region.

For Your convinience i have maintained a refueling spot on the west side of the remains of the old Pan-Am building. Se also my other AD’s in the region, PLCH Cassidy Int./ PHFS-Tern Island,
PMDY-Henderson Field, San Island – Wake atoll./ PWAK-Wake Island
The scenery is created with MSFS SDK and stock objects only, just unzip and drop the pcis folder into Your MSFS community folder, and off Y go.

Are you looking for MSFS2020 Airports Mods at one place? Then you have landed in the right place. We provide the access to our huge database of mods for all kind of needs. Every MSFS2020 Airports Addons has its own type, specifications and features so it’s easy to find what you lack in your game. If you have already chosen the file, click on PCIS-Canton Airport, Phoenix Islands,Kiribati v1.0 Mod download button and follow the instructions. It’s as easy and simple as possible! The PCIS-Canton Airport, Phoenix Islands,Kiribati v1.0 mod will also allow your game number of things. There are still may other mods some of them are little tweaks like a camera changer while others introduce a whole new story mode into your game. Aside from that, we have mods introducing new content to the game, new levels developed by independent creators that will spark a ray of joy within your Flight Simulator. PCIS-Canton Airport, Phoenix Islands,Kiribati v1.0 Mod could be a great boost to your game and there are no reasons why to react negatively. Take the best that you can and don’t look back – you must be orientated to the future and new experiences.